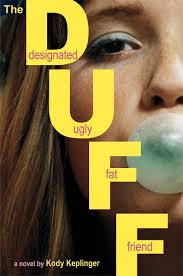 The Duff was recommended to me by my friend Anne.  She is a YA librarian in New York City and I know I can trust her judgment.  She said that The Duff would be something I'd enjoy, and because I value her opinion I bought it without knowing anything about it.  I read it in one greedy sitting, becoming totally immersed in it.
Bianca is The Duff- Designated Ugly Fat Friend- in her friendship group.  At least, that is what Wesley says.  She's already been hurt by her ex boyfriend and her crush on Toby, the political activist, is unrequited.   When her family face a crisis Bianca seeks solace in the most unexpected place...Can she overcome her feelings of worthlessness? And will she ever find a boy she can trust who believes she is special and not just the Duff?
When I read the blurb I was worried it might be a bit too close to home for me.  I have always felt inadequate, always been overweight, never been happy with my appearance.  The angst of those feelings during my teens is something I would rather forget than relive, so I wasn't sure if The Duff would be for me.  But Anne had recommended it, so I settled down to read a chapter or two...and then the next thing I knew I had finished it!
I could completely relate to Bianca.  She never seems sure of what she wants, doubts her own choices and wants to be a little bit selfish yet worries about how she will be perceived by others.  As a character she is 'real'-she has flaws, she knows she doesn't always make the right choices, but mostly she is just a girl trying to find her way in life.
Wesley and Toby were total opposites-it is like comparing Arnie in Terminator with Colin Firth at his most bumbling.  Yet as characters they were really well developed, sometime leaning towards the stereotypes of the playboy and geek respectively, but there are definitely boys like these in every school the world over.
I don't want to give the plot away, but there were times I laughed, times where I wanted to cry and one moment where I almost punched the air in delight!  Whilst this is a YA book, it appealed to me as a thirty-something woman, and I am sure that there are many people within my age bracket that would enjoy The Duff.
As a complete aside, that Kody Keplinger wrote this at age 17- I am envious and in awe in equal measure.  I will definitely be looking out for her other books.
8.5/10