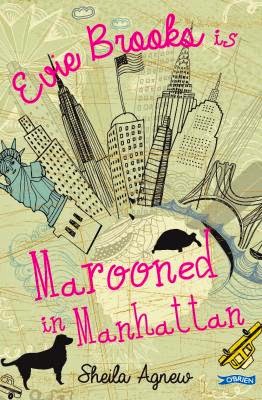 Evie Brooks in twelve years old.  She really doesn't want to go to New York to stay with her Uncle Scott.  But it was her Mother's last wish, so Evie leaves Ireland to find herself in a city which feels worlds away from what she knows.  It takes time, but she eventually begins to fall in love with New York, making friends and helping out at Scott's veterinary surgery.  However, Scott's girlfriend Leela doesn't seem happy to have Evie around, infact she makes it very clear that Evie isn't part of her plans...

When I first started this book I was completely engrossed.  Evie was a character I could empathise with and Leela as a book baddy is perfect.  She is so easy to hate!  However, midway through I lost interest a bit-I was still happy to keep reading, but I felt the plot slowed down a bit.  The ending however- that was right up my street.  A full on dramatic showdown which wouldn't have been out of place on a TV soap opera.  There is a sequel in the pipeline, so it'll be interesting to see what happens next for Evie.  Will she stay in America?  Return to Ireland?  Or end up somewhere else entirely?

This book is aimed at age nine upwards, although there is one use of the word 'crap' which I personally wouldn't want my child to read at that age. I would probably say it is more suited for the Y6/Y7 market.

Marooned in Manhattan is out now, published by O'Brien.

With thanks to the publishers for providing me with a copy of this book in return for an honest review.