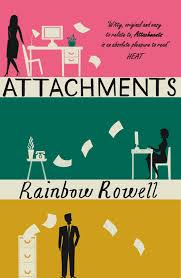 A long time ago, in a galaxy far, far away (OK- late last year on this here blog) I reviewed Rainbow Rowell's Attachments (you can read that post here).  Unlike Eleanor and Park, Attachments is aimed at an adult readership and I'd say it has less crossover appeal.  That's not to say that it isn't a good read, because it totally is and I thoroughly enjoyed getting to know Lincoln, Beth and Jennifer.  I just can't imagine teens relating to it in the way that adults would.  Which is fine, because that isn't the aim.

And that made me wonder- how is it that some authors manage to connect with readers of all ages, whilst others end up pigeonholed into one genre?  I'm not talking about cross over fiction as such, more about authors who are adaptable, able to mould themselves into a writer of both adult fiction and children/YA's fiction.

For example, I adored Judy Blume's books as a child and was beside myself with excitement when I discovered she'd also written novels for adults.  However, although her adult books were perfectly readable they didn't speak to me in the same way her YA titles had, and I was left disappointed.   I wanted that same level of fun, the same angst, the same chaotic friendships and relationships as I'd enjoyed in Tales of a Fourth Grade Nothing and Just As Long As We're Together.  And I didn't feel I got it.

With Rainbow Rowell, her books for teens appeal to me as much (if not moreso) than her books for adults, yet there are striking similarities in her inimitable style across both genres.  She doesn't seem to change depending on her audience.


Her characters are quirky, or outsiders, or normal people.

She strikes the balance between humour and disquietude.

The plot is unique, but the books remain character driven.

For me these are the key elements of a good book, regardless of the target readership.  What good is a fantastic story if you don't give a damn about the protagonist(s)? The multitude of dialogue contributes to a pacey read, the kind you can't put down.  And her books are emotive.  Whatever she writes, you'll feel.

And that's why I can't help but love her books.  Because when I turn the last page, whether it is of a book aimed at teens or adults, I feel like I have lived and breathed every scene. I've been on that bus, picked up that phone, written that fanfic, not just been a passive bookworm wrapped up in a duvet in a bogstandard terraced house.

Rainbow Rowell is magical.  When I grow up I want to write books as brilliant as those she writes.  Books that touch peoples hearts and open their minds.  But most of all, books that people enjoy.