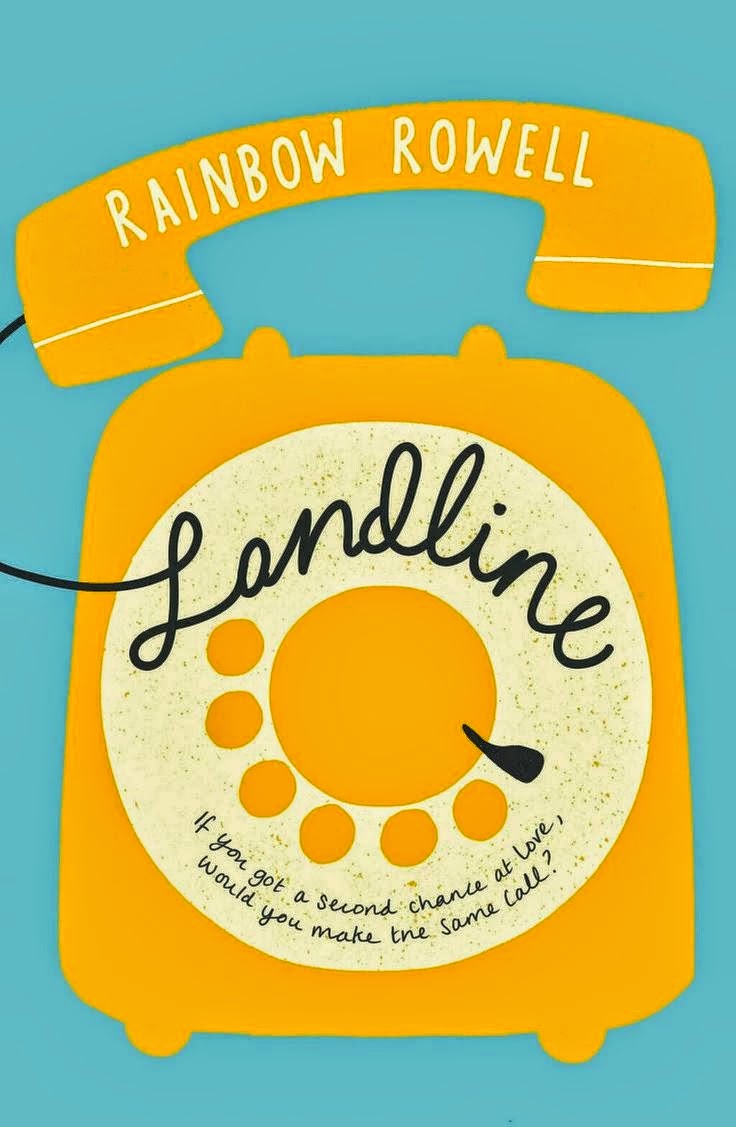 Landline is out today!  So whilst I do the happy dance and the fangirl squee, why don't you read my thoughts on Rainbow's latest release...

Georgie McCool knows her marriage is in trouble. That it’s been in trouble for a long time. She still loves her husband, Neal, and Neal still loves her, deeply — but that almost seems besides the point now.

Maybe that was always besides the point.

Two days before they’re supposed to visit Neal’s family in Omaha for Christmas, Georgie tells Neal that she can’t go. She’s a TV writer, and something’s come up on her show; she has to stay in Los Angeles. She knows that Neal will be upset with her — Neal is always a little upset with Georgie — but she doesn’t expect to him to pack up the kids and go home without her.

When her husband and the kids leave for the airport, Georgie wonders if she’s finally done it. If she’s ruined everything.

That night, Georgie discovers a way to communicate with Neal in the past. It’s not time travel, not exactly, but she feels like she’s been given an opportunity to fix her marriage before it starts . . .

Is that what she’s supposed to do?

Or would Georgie and Neal be better off if their marriage never happened?

I was very fortunate to be able to read Landline prior to release.  As a huge fan of all Rainbow's previous novels I had ridiculously high hopes for this one.  Hugely high.  Like Empire State Building high.

I'd set aside an afternoon purely to read Landline, and I was well armed with chocolate biscuits and a cup of tea.  Perfect.  It took a while to get going, in fact I actually put it down because I wasn't immediately feeling it.  Georgie irritated me, Neal irritated me, their relationship irritated me- I just felt overwhelmingly....irritated.  As an outsider looking in I wanted to bang their heads together and tell them that for any marriage to work there needs to be compromise because it isn't all hearts and flowers, it's bloody hard work.

Then the quirkiness kicked in.  The landline.  And I wasn't sure what to think.  It was a fresh idea, totally original, but I wanted angst, emotion, moments that would make my heart pang and my stomach lurch.  And slowly, through the conversations Georgie has with young Neal, the reader learns about their relationship.  That was what I'd been waiting for, that insight into the human condition which Rainbow conveys so well.  From then on I was sucked in, loving seeing the juxtaposition of Georgie and Neal's time together from students to 'old marrieds'.  It was realistic, a world away from the way marriage is portrayed in a lot of fiction.  In fact, at times it was painful to read- I cried twice whilst reading, proper gut wrenching cries.

It's difficult to summarise my feelings about this one.  I didn't enjoy it, but I did appreciate it.  It did touch me, and I invested more in the characters as the plot progressed- I can see me thinking about this book in the future and recalling the message it sends.  For me it didn't have the immediate impact of Rainbow Rowell's previous works, but I know that the more I mull it over the more I will see.  It's one of those books that needs digesting.

And I really wish I had that yellow rotary phone in my life.