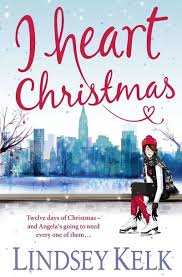 Blurb
Angela’s planning her very own fairytale of New York…

But Santa’s throwing her a few curveballs – new job (as if it’s not mental enough already), new baby-craze from her best friend Jenny, and Alex determined they should grow up and settle down. Once friends start turning up uninvited on her doorstep (and leading her astray), can Angela really have a merry little Christmas? So much for happy holidays – something’s got to give…
Show More
Show Less

Review
Just incase you've been living under a rock for the past few years, I need to start by saying I Heart Christmas is part of a series.  You could read it as a stand alone novel, but it would be much better to start at the very beginning to get to see the characters develop and find out how they are interlinked.  Lindsey Kelk's writing style is fun, fresh and particularly appealing for a new adult/20s-30s female audience.

It was lovely to catch up with Angela, Alex and friends as they juggle life, love and Christmas mayhem in New York City.  Let's face it, it is a perfect place at Christmas. *insert gratuitous, yet grainy picture of me and hubby at Rock Center in New York on our honeymoon, Christmas 2005* 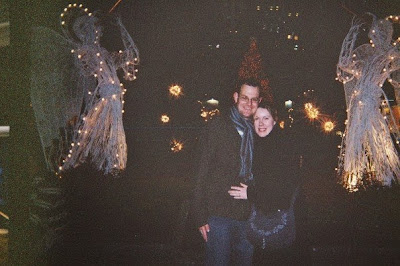 Despite the title, I Heart Christmas is not overly festive.  There are Christmassy references but these aren't dished out every other sentence, which will make this novel readable whatever the weather outside.  Personally, I had hoped for slightly more festivity as I was reading it the week before Christmas and tinsel, fairy lights and wrapping paper were taking up every other aspect of my life!

I Heart Christmas is full of the trademark humour Kelk is famous for, the quick one liners and larger than life characters.  If you've read the other books in the series this is very much of the same ilk-a warm, entertaining read.  If you haven't read any before then think the fun of Sophie Kinsella with a bit more edginess and you won't be far off the mark.

I think it's time for me to do some rereading of books by the Kelkster and I'm making plans to run a Lindsey Kelk week here on Books with Bunny during 2014!

I Heart Christmas is out now.

Lindsey very kindly agreed to write an exclusive piece for us about Christmas, in her own inimitable style....

I have been in love with Christmas for as long as I can remember and yet, when I think back, there were so very many traumatising Christmases that really should have challenged my devotion. One of my very earliest Christmas memories involved a particularly unpleasant illness that resulted on me laying on the settee all day when I was about five, wrapped up in a very attractive quilted dressing gown, and whimpering pathetically until I threw up all over said attractive quilted dressing gown, my teddy bear and the settee.


A couple of years later, when I was a very mature six years old and had totally grown out of quilted dressing gowns, I remember sitting on the same settee (it had been cleaned) watching my mum dress the Christmas tree. I remember being utterly consumed by a desperate need to help put the baubles on the tree. Seriously, I can’t even begin to describe to you how badly I wanted it. As an adult, the only vaguely comparable yearning I can compare it to, would be waking up to find Michael Fassbender naked in your bed, holding a Chanel 2.55 in one hand, a pair of Louboutins in the other and dangling a Tiffany diamond necklace from his peen and not knowing where to start. And if that wasn’t bad enough, Pete’s Dragon was on the telly. Pete’s Dragon is a really emotional film. Anyway, it was 1986, I was probably very badly dressed and I wanted to hang one bloody bauble on that bloody tree. But my mum wasn’t having any of it. And so I did what any right-minded young lady would have done. I had a complete and utter emotional breakdown. Screaming, crying, hiccupping, the works. Of course, my mum responded as any right-minded young mother would. She turned, raised an eyebrow and calmly explained that behaviour such as this was the reason I was not allowed to help dress the tree.


When you throw those two in with the Christmas I threw up at eight am after beating my brother in a pre-breakfast chocolate orange eating contest, the year I went to my boyfriend’s parents’ house for Christmas dinner and went to bed hungry (they were clearly savages) and the time I burst into tears upon being presented with a My Little Pony that I already owned because I had been so excited to open a present and then didn’t know how to explain that I already owned it, oh and that year Nicolae Ceaușescu was executed on Christmas day while I was busy trying to place all the stickers in exactly the right place on my Sindy Kitchen Café, you’d think I’d have a complicated relationship with Christmas. But I don’t. I bloody love it. So come on Christmas 2013, throw it all at me – I’ll be busy scoffing a chocolate orange while trimming my own tree and not watching Pete’s Dragon in an attractive non-quilted dressing gown. Because that’s how I roll.