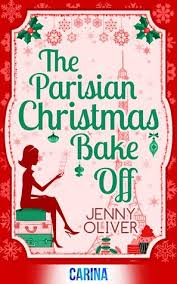 The Parisian Christmas Bake Off is a sweet story in every sense.  Rachel is entered into a Bake Off competition being run by famous Parisian chef Henri Salernes by her work colleagues.  Somewhat reluctantly, she goes, unsure of what to expect from Paris or the competition.  Rachel and her fellow contestants become engrossed in the experience, throwing their heart and soul into their baking.  But of course, in the city of love romance is also on the cards...

I really enjoyed The Parisian Christmas Bake Off.  I'm not a huge 'foodie' but I am a fan of the Great British Bake Off on TV, so I had been looking forward to a book that was in the same field.   The element of competition (plus the inevitable baking disasters) were entertaining to read about and I loved the descriptions of the food-honestly, my mouth was watering!  Perhaps this isn't a good book to read on an empty stomach...

I enjoyed the romantic side to the story too- although predictable there were a few little twists that could have gone either way.  Rachel's love interest is appealing and attractive, and I found myself really rooting for Rachel to get her happy ending.

This is a festive read, but could equally be enjoyed at any time of the year - a lovely story to read with a huge cup of hot chocolate.  And of course, a large wedge of cake.

The Parisian Christmas Bake Off is out now, published by Carina.

Would you like to read The Parisian Christmas Bake Off?  Enter the rafflecopter giveaway below to win an ebook copy...

Jenny Oliver, author of The Parisian Christmas Bake Off has also very kindly written a guest post for Books with Bunny which you can read below...


I’ve always loved Christmas, and for that very reason have always wanted to write a Christmas book. It was just I wasn’t quite sure what my Christmas book was going to be about!


Late this summer I was on holiday in a tiny village in France. We were staying in an apartment that overlooked the main square and from the balcony could watch all the different characters as they chatted over beers and creme de menthe, argued over espresso, fought about parking spaces and haggled the price of market vegetables. Over in the far corner of the square there was this one little bakery that was always busy. From the moment it opened - when we had to leave for the airport in the dark at 6am it was already serving - locals were filling their baskets with baguettes, crusty rolls, local fig loaves and at the weekend flakey, glistening croissants, pain au raisin or the most deliciously, hedonistic chocolate and almond croissants that were so fat and dense with frangipani that they could barely rise beyond their weight but they were the type of thing that when you got down to the last morsel you were eeking it out into tiny, weeny bites just so it might never end! It wasn’t just the breads and croissants though, I’d watch as people bought cakes for the family at the weekend - individual sachertortes, profiterole-esque religieuse, florentines, sharp citron tarts boxed up and tied with ribbon and a berry clafoutis that was bitter when you first put it in your mouth and then brilliantly sweet and squishy on the tongue. On the walls of the bakery were all the leaflets for the town events - the antiques market, the village fete, the music evenings under the plain trees and then invitations to join clubs for everything from cookery, walking and dancing to shooting and archery - and behind the counter was a terrifying woman who started to return our desperate smiles after a week and by the end of the fortnight was waving across the square when she saw us. The couple staying out of season in this town where no other tourists seemed to be!


It was the fact that we were out of season that lead me from this little french bakery to the idea of a bake off. On a Monday most places in french villages close out of season so there was nowhere for us to go for a drink or a meal and the cinema had shut for three weeks. In the end we ate plump artichokes in our flat, dripping with vinaigrette, and watched Great British Bake Off on my lap top! More autumn evening in England than summer holiday in France but a couple of days later as I was swimming in the sea on a drive down to the coast I realised that everything could come together beautifully in that illusive Christmas book. The village became Paris, the bakery became the pastry school and the Bake Off became the competition where my heroine would find not only herself but her forgotten baking skills and a new, improved love of Christmas. And instead of the sun (which didn’t make much of an appearance on this holiday) came the snow, buckets of it, thick, white flakes that just get heavier and heavier till Christmas day - the type I have my fingers crossed for this December.