It's just another Milly Monday, o-o-oooooo (in a Bangles style singing voice...)
And today I'm reviewing The Yorkshire Pudding Club, which was Milly's debut novel and is still my absolute favourite of hers. 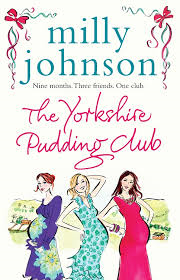 The Blurb:
Three South Yorkshire friends, all on the cusp of 40, fall pregnant at the same time following a visit to an ancient fertility symbol. For Helen, it’s a dream come true, although her husband is not as thrilled about it as she had hoped.

Not only wrestling with painful ghosts of the past, Helen has to deal with the fact that her outwardly perfect marriage is crumbling before her eyes. For Janey, it is an unmitigated disaster as she has just been offered the career break of a life-time. And she has no idea either how it could possibly have happened, seeing as she and her ecstatic husband George were always so careful over contraception.
or Elizabeth, it is mind-numbing, because she knows people like her shouldn’t have children. Damaged by her dysfunctional childhood and emotionally lost, she not only has to contend with carrying a child she doubts she can ever love, but she also has to deal with the return to her life of a man whose love she must deny herself.

Heart-warming, up-lifting, tear-jerking and lovely, THE YORKSHIRE PUDDING CLUB is the story of how three women find themselves empowered by unexpected pregnancy. How it revitalises one woman’s tired marriage, strengthens another’s belief in herself and brings love and warmth to a cold and empty life.

I first read this book as soon as it came out back in 2007- an impulse buy.  I knew nothing of Milly Johnson, I didn't know she lived pretty much down the road from me and I committed the cardinal sin of buying purely on the cover (which was different to the one posted above, but still beautiful and eyecatching).  As it happened, I was pregnant myself when I read The Yorkshire Pudding Club, so the theme obviously resonated with me.  I could empathise with the worries the women in the novel face, the excitement and fear all wrapped up in something you can't see.  In my hormonal state there were tears, particularly for Elizabeth.  Although her story was nothing like my own, I felt like she was a friend and I longed to reach out to comfort her and offer her reassurance.

Rereading this book as the parent of a six year old, I found myself looking at the book in a different way.  Partly nostalgia for my own pregnancy, nostalgia for the feelings I had when I first read the book and also the knowledge that Milly Johnson has gone on to become one of the most successful authors in her genre.  The typical Milly nuances and humour are evident in The Yorkshire Pudding Club (although have, in my opinion, become better executed in her later novels as she has developed her style).

One thing I love about this book (and many of Milly Johnson's other titles) is the diversity of the characters.  It makes them easy to relate to, keeps the story moving quickly and offers the opportunity to see things from a variety of viewpoints.  It is also a reminder that friendships do not have to be between people from similar background, something which is a great lesson in life.

Overall, I still loved this book second time around.  I have read so many 'chicklit' books about pregnancy but this is the one I like best of all.

The Yorkshire Pudding Club is out now, published by Simon and Schuster.