You don't know me, but...- Clarke Carlisle 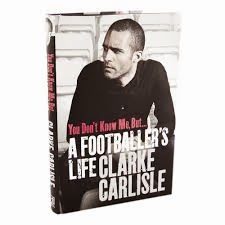 I've had a bit of a fangirl crush on Clarke Carlisle for many years.  He's an extremely handsome chap.  He always speaks in a considered way.  He stands up for what he believes in in the fight against racism/homophobia/mental health awareness.  Plus, he has been on Countdown (I auditioned for Countdown once and didn't make it on, so anyone who does is a success in my eyes).  So when my husband bought me this book for Christmas, my eyes lit up like glowing lights on our tree.

Anyway, enough fangirling.  On to the book.  I've read so many football autobiographies over the years, some high profile premier league players and others by players who have plied their trade in the lower leagues.  Quite a few of them deal with the impact that success and fame can have on a person, particularly those with an addictive personality (thinking of particular about the autobiographies of Tony Adams, Paul Merson, Niall Quinn here).  You don't know me, but... does have some similarities to these books. Clarke makes no bones about his addiction, and talks frankly about how decisions have been impaired as a result of these addictions.  However, for me the highlight of this book is Clarke's ability to convey what it is like to be suffering from depression, especially when to the outside world it seems you have it all going for you.  I found myself nodding along saying 'yes, that's exactly what it's like!' and he beautifully captures the fragility and vulnerability of a depressive.  I've never overdosed, thankfully, but the acute pain Clarke writes of in the section about his own overdose is hard hitting and emotive.

In terms of his footballing stories, there are some interesting ones-as a Sheffield United fan I was interested that he might have been transferred to Bramall Lane at one point, and I am always keen to hear how players and former players talk about the managers they have worked under.  Yet the forte of this autobiography is without a shadow of a doubt how impeccably Clarke Carlisle talks about issues that other people in the public eye shy away from.

His obvious intelligence adds to the readability, the words flowing freely which makes You Don't Know Me, But... an easy book to get sucked into.

One minor mistake in it that griped me a bit as an adopted South Yorkshire lass- Rotherham's new ground is not Don Valley (that's the one with the running track, now being demolished), it is the new York Stadium.

Overall, I wouldn't just recommend this book to sports fans, but to anyone who has felt at a low ebb.  It is exquisitely written and yet remains highly accessible.

You Don't Know Me, But... is out now published by Simon and Schuster.