But it was never supposed to be that sort of game... 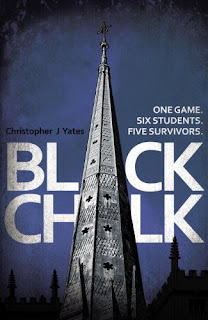 Black Chalk is a gripping tale of campus life, peer pressure and how a harmless game can escalate to become all-encompassing.  Six Oxford students become involved in Game Soc- one of the many societies designed to distract students from their studies.  However, what started as a game full of childish dares and minor humiliations soon transpires to be much more than that, with tragic consequences... Set over a fourteen year period, Black Chalk is a chilling representation of egocentric desires and dogged resolution to triumph.
Black Chalk has a really interesting premise.  The idea that we can so easily relinquish control, especially when battling to be a 'winner', really resonated, and whilst there were times when Black Chalk did seem far-fetched, the dark and ominous foreboding that I felt as a reader had me hooked.  There were plenty of twists and turns and Yates's writing style is succinct yet illuminating, which allowed me to visualise both the characters and settings throughout.
I found the earlier sections of the book the most interesting, particularly the tasks the students were required to complete early on.  Amusing and cringeworthy, they set the scene and allude to what later comes.
If you are a fan of dark, psychological thrillers, Black Chalk is well worth a read.  I can also imagine it working well as a dramatisation serialised for TV.  Yates has created a dense and impactive work that draws the reader in as the game spirals out of control .
Black Chalk is out now, published by Harvill Secker.
7.5/10
With thanks to Fiona for providing me with a review copy of this book in return for an honest review, and to Christopher J. Yates for his support and co-operation, including providing Books with Bunny with the exclusive piece published below.  Here's Christopher...
I noticed that Kate very recently posted about her favourite places to read and I thought it might be fun to respond with my favourite places to write.
1) On holiday


This might seem odd, after all, I’m supposed to be on holiday enjoying myself. However, the mind doesn’t stop ticking just because the water’s warm and the beer is cold, for example. In fact, I wrote a lot of my first book on my honeymoon in Argentina. My wife quite took to the idea of taking a siesta every afternoon and while she did, I tapped away as the lunchtime refreshment tangoed its way down through my brain.


I live near Tompkins Square Park in New York and it has an excellent dog park. My cocker spaniel Mabel is considerably antisocial but when the weather is good I force her to mingle snootily with the other dogs (she thinks she’s better than them) while I scribble away in a notebook. I’m English, but I love to hear the chatter of Americans around me while I write. The different tones, the different ideas, the different words…


Again, I love being a secret foreign scribbler. The New York subway flashes around you with kaleidoscopic life. Ideas bubble up. Even if I’m setting a scene in an Oxford garden, the subway energises me.


It’s been said many times by many writers, even the heaviest drinkers – alcohol and writing DO NOT MIX (by which it’s actually meant, being drunk and writing do not mix). However, one pint, two pints at most, sometimes a bar can be a very pleasant place to lay down a few words. You write five hundred of them, you look at them the next day, you delete the last 92 words. (1.647 pints is the precise point at which alcohol ceases to become useful.)


OK, not my favourite place to write but by far the most productive. This is the engine room. 95 per cent of my first book was written at my desk (in a corner of my bedroom, next to a school playground, accompanied by the screams of young children). I might enjoy the other locations more, but realistically, unfortunately, this is where the hard graft is done. And at least if I’m at home, I’m never far from the kettle.