If you say the name 'Frank Lampard' to someone, they are unlikely to immediately think 'author'.  Son of West Ham United legend Frank Lampard Sr, Frank is best known as one of the most successful footballers in the country- an England international and Chelsea hero.  But Frank has another passion-promoting children's literacy.  He has written the Frankie's Magic Football series to appeal to both boys and girls. 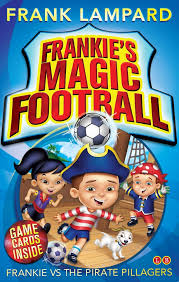 Frankie vs the Pirate Pillagers is the first book in the series.  It begins with Frankie and his friends enjoying a trip to the funfair.  They come across a football stall and Frankie decides to have a shot in the hope of winning a prize.  Nobody expects him to be successful, least of all the stallholder who hadn't even got a prize to give!  The tatty old football is all he has to give, and Frankie accepts, unaware of the magic power of the battered ball.  The friends head home for a kick-about and suddenly find themselves whirling through a magical space.  Before they know it they are aboard a pirate ship, and are expected to play a match against a team of pirates including Captain Cropper.

Frankie vs the Pirate Pillagers is a fast paced, novel book aimed children aged 5+, although I would say it is most suitable for 7-9 year olds.  The idea of Frankie and his friends being magically transported to play against people from a variety of backgrounds and eras is entertaining, reminiscent of Enid Blyton's Faraway Tree books.  I can imagine the Frankie series would particularly appeal to reluctant readers and boys who have become disinterested in books, partly due to their celebrity author.  The brightly coloured cover certainly draws the eye in and would make the book attractive to children.  The additional glossy 'Top Trump' style cards which were fixed to the book and can be collected over the series were also a hit with my five year old son.

Overall, I admire Frank Lampard for his writing efforts and am sure there is a market for adventure/football fiction for children.  The story was entertaining and age appropriate, with a strong message promoting teamwork morals.  I was pleasantly surprised by how much I enjoyed it.

I shall be reviewing the second book in the series, Frankie vs the Rowdy Romans for Making Them Readers very soon.

Frankie vs the Pirate Pillagers is out now, published by Little, Brown Kids.

With thanks to Little, Brown Kids for providing me with a copy of this book in return for an honest review.
Posted by Katey Lovell at 17:23