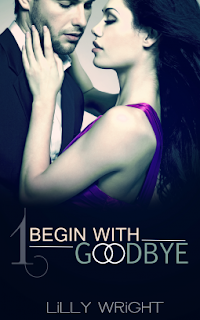 Begin with Goodbye is a serialised novel, expected to be completed in seven parts.  This first part is 18 pages long, and introduces the reader to Samantha, who is reluctantly back in her hometown for her sister's funeral.  Samantha is not only learning to live with her bereavement but is also having to face her sister's husband, her own former lover Julian.

Whilst I enjoyed the first person narrative which allowed some astute observations, I found Begin with Goodbye a bit rushed at times and the plot felt far-fetched.  I am a fan of romantic fiction, but I just didn't feel like I bonded at all with any of the characters.  The sudden ending, which is perhaps to be expected in a serialised book, left me unfulfilled, which was a shame as there were parts of this book which really appealed, especially some of the more emotive aspects.

I wouldn't rush out to get the next instalment of Begin with Goodbye, but can imagine that it may do well if they ever get published in one complete volume.

Begin with Goodbye is out now, published by All Night Reads.

With thanks to the publisher who gave me a copy of this in return for an honest review.