Meet the Author event- Ben Aaronovitch (Off the Shelf Festival)

I mentioned last week that I had been to an event as part of the Sheffield Off The Shelf Festival of Words (you can read about it here).

Last night I, along with around 45 others, went to an event at Highfield Library to meet Ben Aaronovitch, author of the Rivers of London series.  I forgot to take my notepad with me to scribble down all the points I wanted to, so ended up desperately squeezing as much as I could onto the back of an envelope!

Here's what I found out about Ben Aaronovitch...

- He describes his family background as being 'intellectual but poor' and was a dedicated user of Highgate Children's Library as a child.  He hates to think of a generation without libraries, admitting that he loves 'that smell of old books'.  He compared libraries to dodo's, saying that if we don't protect them then one day we'll look back and wonder what on earth happened to make them all disappear.

- Ben is naturally a quiet person and often hides in his room 'not writing' (when he should be!).  He is reluctant to share his opinion on political events etc as there are 'too many opinions in the world', both from those who have knowledge and those who don't.

- He loves reading books that are part of a series.  He also enjoys audiobooks.  However, he is not keen on the Booker Prize and the like, saying he places value on what he enjoys (predominantly sci-fi).  He is a fan of Terry Pratchett.

- There is going to be a Rivers comic series, and possibly also short stories.  When asked about the possibility of 'spin offs', ben said he does have this in mind, particularly Abigail's story.

- Book 5 of the series is a departure from London and will be set in rural Herefordshire (I was very excited by this as it is my old stomping ground!).  Ben also says that this was going to be book 2, but it was suggested he would be better focusing on London as it was what readers had come to expect.

- He had a dyslexia test as a child, but the assessment was that he was 'not dyslexic, just lazy'.  Ben still struggles with spelling, saying 'there/their/they're is a bugger'.

- He used to get up at 4am to write as he was working in Waterstone's and struggled to fit in time to write.  He believes all writers make sacrifices, and that he had his 'son, job and writing-no other life'.

- He believes he had a lot of luck in that his books came out at the right time, had excellent covers and he got an interview slot on the Simon Mayo show which raised his profile hugely.

I had a fantastic time and was delighted to meet Ben Aaronovitch.  He came across as a genuine guy, affable and unable to process the success he has had.  He signed a book for me and took the time to listen to a personal story related to when I was reading Rivers of London, as well as posing for the following photo. 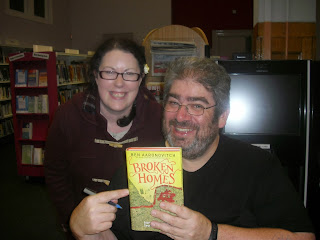 1) You must write!  Having a novel in you is worthless- you have to get it out of you
2)  Writing is a craft skill- you get better at it by doing it
3)  Don't worry about spelling and grammar- you can get copy editors to do all that for you afterwards!
4)  Sometimes it helps to have a musical playlist, particularly film music which is emotive but often is without the distraction of lyrics
5) Remember who your protagonist is and don't be distracted by minor characters.  Ben said he has a sign that says PETER IS THE PROTAGONIST in his writing area.
6)  Ben says that characters can come to you in one of three ways.  Firstly they can spring into your mind complete (he said this happened with Peter), secondly they can be 'constructed like lego blocks' and finally they 'open the door but never leave'.  He says many of his minor characters 'urge to live' and then get extended roles in his books.
7)  If you want to write, even short stories, write at least 5,000 words to get out of the habit of writing '3 sides of a4'.
8)  Get used to rejection
9)  Don't try to predict your audience.  Ben expected only 'sci-fi geeks' to enjoy his books, but they are often chosen by book groups, WI, Grandmothers etc!
10)  Write what you want to write