On arriving home after a friend s posh wedding, launderette worker Harriet, finds her life irrevocably changed when she discovers her flat ransacked and her boyfriend missing. In a matter of hours she is harassed by East End gangsters and upper crust aristocrats. Accepting an offer she can't refuse, Harriet, against her better judgment becomes the fiancée of the wealthy Hamilton Lancaster, with dire consequences. What she had not bargained on was meeting Doctor Brice Edmunds. The Valentine Present and Other Diabolical Liberties is Lynda Renham's funniest novel so far. A cocktail of misunderstandings, three unlikely gangsters, a monkey and a demented cat make this novel a hysterical read. Follow Harriet s adventure where every attempt to get out of trouble puts her deeper in it.
Show More
Show Less 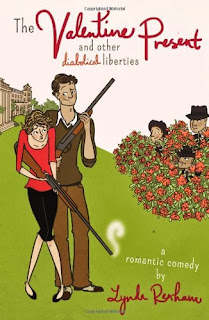 Arriving home after a posh wedding do, Harriet finds her flat ransacked and her boyfriend AWOL.  Gangsters turn up on her doorstep demanding money and in a desperate attempt to raise much needed funds Harriet agrees to act as the fiancée of Hamilton Lancaster, a well-to-do gent set to inherit the family business.  When she meets Doctor Brice Edmonds, Harriet finds herself in a complicated situation, well out of her depth.
I found The Valentine Present and Other Diabolical Liberties an easy read which didn't require much concentration.  The characters were caricatures and the plot entertaining, which meant it was fast paced.  This is very much a book which doesn't take itself too seriously, however, I felt it tried a bit too hard to be constantly funny and that was the main negative for me. I was amused by some sections of this book but found the constant jokes and one liners relentless, almost to a fault.  Personally, I would also have preferred less swearing as I felt it unnecessarily littered with expletives.  Saying that I know Lynda Renham has a large and loyal fan base and is held in high regard by readers, so maybe I am in a minority.

I would recommend this book to fans of the chicklit genre who like their romance with a large dose of comedy on the side.

The Valentine Present and Other Diabolical Liberties is available in ebook and paperback, out now.

With thanks to the publisher for providing me with a copy of this book in return for an honest review.
Posted by Katey Lovell at 07:00