Hatters, Railwaymen and Knitters is quite different to books I have previously reviewed for Books with Bunny. An examination of the quirks of British behaviour and the changing face of the national game, Daniel Gray's book reads as a love story-love of Britain, love of football and love of the diversity of our nation. 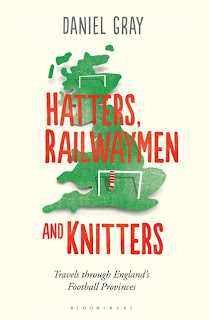 Before starting a family, I had a season ticket at Sheffield United.  From 1998 until 2007 I could be found at the Lane every other week, and attended around a third/half the away games most seasons. I also went to youth team games (watching players including the now England regular Phil Jagielka), reserve games, open days, 'meet the manager' events, watched training sessions at the old training ground at Abbeydale and generally lived and breathed Sheffield United.  I met my now husband via a Sheffield United online forum and chose to come to university in Sheffield so that I could watch more games.  I have hundreds of photos of myself gurning alongside former players from waiting at the players entrance.  I suppose what I am trying to say is that I know how it feels to have a bond to a team, to feel part of that community that football creates, to have an identity that is formed largely around the team you support.  Just to prove to you that I am writing this review as 'someone who understands'.

Gray visited towns and cities across England in the 2011-2012 season, examining their relationships with the local football teams.  From Burnley to Carlisle, Crewe to Leyton, Hatters, Railwaymen and Knitters explores the diversity of England and the relationship between a local team and the town they are part of.  More than purely a book about football, this is a history lesson, a social commentary, a declaration of love for the beautiful game.  Gray's acute observations will resonate with football fans such as the summing up of the anticipation of visiting a new ground with the phrase 'may nothing stop the feeling a first visit to a new ground gives'.  Portrayals of towns and the characters who reside there alongside both footballing and local anecdotes will amuse and inform in equal measure.

It is perhaps obvious to compare Gray to Hornby given the subject matter, yet the comparisons stretch beyond a passion for football.  Wry observations of the quirky behaviour of football fanatics and a dry underlying humour appear to be Gray's fortes, making Hatters, Railwaymen and Knitters a highly readable and entertaining piece.  Beautifully written, nostalgic and reflective, this will also appeal to fans of Simon Armitage, Stuart Maconie and Tim Moore.

And as this is my blog and it's the first day of the new football season, I'm going to finish this entry my way-Up the Blades!

Hatters, Railwaymen and Knitters is out now, published by Bloomsbury.

9/10
*With thanks to Bloomsbury for providing me with a review copy of Hatters, Railwaymen and Knitters*
*You can find out more about Daniel Gray at his website *