Oh, Enid Blyton.  The cause of much debate and controversy in children's fiction, yet still incredibly popular.  Adults are often dismissive of Blyton, even those who loved her books as a child, and I was very keen to start rereading some of my favourites.  When the opportunity to review The Secret Seven came up, I jumped at the chance.  I must have read the whole series at least ten times between the ages of 5-10, and the books that I especially enjoyed many more times that that. 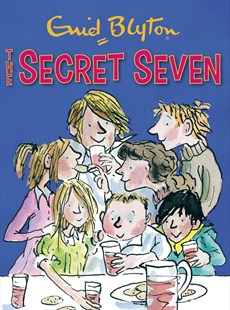 With slight trepidation I picked up the book.  Would I be disappointed?  Should childhood favourites be left in the past for fear of spoiling the happy memories they provide?  Or would I feel like I was being reacquainted with old friends?

The Secret Seven is the first book in the series.  First published in 1949 there are definitely parts of it that seem dated, especially some turns of phrase that are used (particularly by straight laced Janet).  However they were probably also outdated in the mid 1980s when I read these books the first time, and I was never aware that they were so old fashioned through my childhood eyes.  The same could well be true for children in modern society, infact I would go as far as to assume that it IS true, or the books would surely have gone out of print-nostalgia alone is not enough to keep publishers printing books, they have to actually sell too.

I whizzed through the story, and recalled many of the key moments throughout.  It was almost like being transported back to my own childhood, a sense of deja vu.  I loved reliving the adventure, particularly the sense of being tucked away in the shed sat on a flowerpot in the meetings the children have.  Passwords and disguises abound as the seven set off to find out who the stealthy men sneaking around a spooky old house are.  What are they doing, and why?  Of course the Secret Seven come up trumps, I don't think that is a spoiler, and as an adult I finished the book with the same sense of satisfaction that I did the first time around.  This surely shows the power a good book has, it can stand the test of time and be read at varying stages in life and still be appreciated.

The Hodder edition I had to review was illustrated by Tony Ross, which is obviously an attempt to make the books as visually appealing as possible to the young audience of the twenty-first century.  Whilst I liked the illustrations I didn't feel they gelled especially well with the text, but this may just be because they are not what I would traditionally associate with Blyton.

Don't overlook Blyton thinking her work outmoded and irrelevant for children today.  Any child seeking high adventure and a story about true friendship and teamwork will find plenty in the Secret Seven books to appeal to them.

I have already decided that I'm going to buy all the books in the series to reread and review.  They will then remain on my son's bookshelf to hopefully be enjoyed again and again-they are classics, pure and simple.

9.5/10
With thanks to Hodder for providing me with a copy of this book in return for an impartial review.
Posted by Katey Lovell at 21:15