The Second Time I Saw You- Pippa Croft 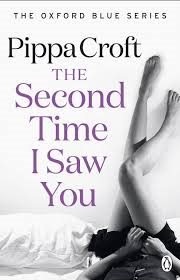 It's the beginning of a new term at Wyckham College, Oxford, and a fresh start for Lauren Cusack. Her fingers were badly burnt when a whirlwind romance with gorgeous English aristocrat, Alexander Hunt, became too hot to handle - and now she's determined to keep her distance.

Her resolve is shaken when Alexander appears on her doorstep - he's been completely torn apart by some devastating news. Lauren knows that she should stay away, but their chemistry is undeniable and she soon finds herself back in Alexander's arms.

Can Lauren handle the drama that comes with Alexander Hunt? Or will she have to sacrifice the most exhilarating passion she's ever known . . .

Fans of E L James, Tammara Webber and Beth Kery won't be able to get enough of Pippa Croft's Oxford Blue romance series. The First Time We Met and The Second Time I Saw You are the first two novels in the series, followed by Third Time Lucky, which is also available to pre-order from Penguin.

Pippa Croft is the pen name of an award-winning romantic novelist. After studying English at Oxford, she worked as a copywriter and journalist before writing her debut novel, which won the RNA's New Writers' award and was later made into a TV movie. She lives in a village in the heart of England with her husband and daughter.

The Review
It is really rare that I read books in a series back to back regardless of how much I love them, but I couldn't help myself when it came to Pippa Croft's Oxford Blue series.  I loved the balance of out and out drama and tantalising raunch in The First Time We Met (you can read my review here ) and showed no restraint-I just had to read The Second Time I Saw You right away.

We're taken back to Oxford for Lauren's second term of university.  This book delves deeper than The First Time We Met- probably because we are already familiar with the characters.  However, life has irrevocably changed for Alexander, and although are plenty titillating sex scenes for the fans of erotica there is also a strong story running through the book.

Without giving too much away we find out more about Alexander's younger sister (who pushes boundaries in the way teenagers are wont) and life at Falconbury, and I loved this.  It felt like the series had moved on yet still had all the familiar elements that I loved about the first book.  There are secrets and lies throughout and as the story unfolds the links between the characters are more apparent.  It seemed that the characters all had to grow up quickly because of events in this book, and I enjoyed finding out more about Lauren's compassionate side.

I'm not going to lie, the ending almost killed me.  It is a complete cliffhanger which had me screaming 'NOOOOOOOOOOOOO' at the thought that I'll have to wait for the final instalment of Oxford Blue.

It's fair to say that I'm a fan.  Hurry up with part three Pippa, we're all waiting!

The Second Time I Saw You is out now, published by Penguin.

With thanks to Penguin for providing me with a copy of this book in return for an honest review.