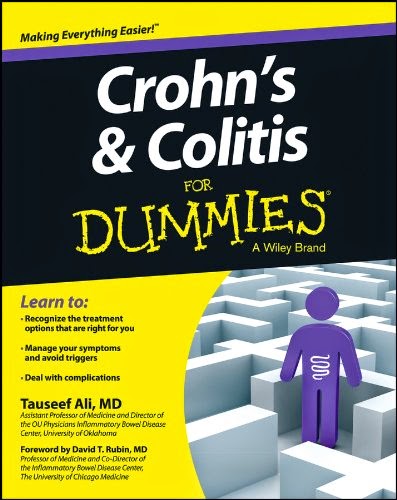 Crohn's disease and colitis are frustrating, often debilitating gastrointestinal diseases that can have a severe impact on the overall health of those who suffer from them. According to the latest estimates, more than 600,000 patients in North America have Crohn's disease. Written by a physician specialising in the treatment of IBDs, Crohn's and Colitis For Dummies is a complete plain-English guide to understanding, treating, and living well with these diseases.
The Review

Late last year, after a long, long time of feeling ill and fighting for a diagnosis, I was diagnosed with Crohn's Disease.  Although not an especially rare auto-immune disease, it is a condition I knew little about so I began trying to gain information from reliable sources.  My first stop was the Crohn's and Colitis UK website (you can access it here) and I bought a few books which were recommended on forums dedicated to IBD.  This was one which was mentioned a lot, so I took the plunge and downloaded it.

As someone newly diagnosed I felt the detailed descriptions of the conditions were informative and reasonably accessible-at least, in comparison to other books.  It covered everything from the symptoms to treatment options, the effect of diet and possible ways to reduce the likelihood of flares.  However, it was not as simplistic as some of the other 'for dummies' books I've read, possibly because of the complexity of Crohn's and Colitis.  Also, there is obviously a need to use a certain amount of medical lingo which meant a certain level of concentration was needed.

The other down side for me was that it was obviously aimed at an American audience.  The treatment offered here in the UK is different to that in the States, as is the health care and although I appreciate it is all but impossible to produce a book like this that will be applicable to a global market, I felt it would have been nice to know that some sections would be irrelevant to me prior to purchase.

Overall, I personally found more beneficial and up to date information on reputable websites, but I was glad to find a book dedicated to IBD which was widely available.