No One Wants to Be Miss Havisham - Brigid Coady COVER REVEAL

So here it is- the exclusive cover reveal for Brigid Coady's novel No One Wants to Be Miss Havisham!
Isn't it super pretty?! 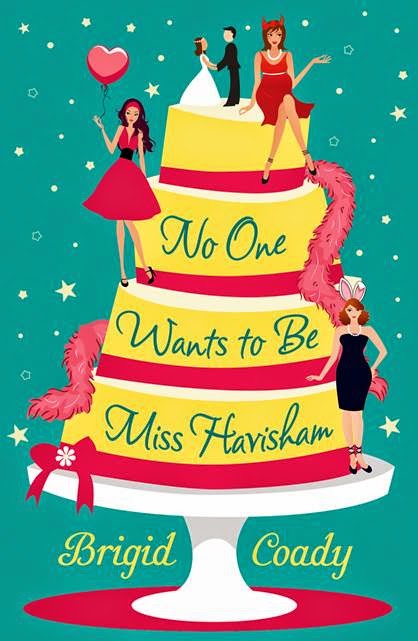 After loving Brigid's Kiss stories (you can read my reviews here ) I'm delighted that there's finally a full length novel on the way, due for release on June 11th- just in time for some summer reading.

I''ll pass you over to Brigid, who is obviously thrilled to be able to share news of her 'baby' with all the lovely readers out there.

"I'm so excited to be revealing the cover of my first full length novel, 'No One Wants to Be Miss Havisham' here with Bunny Lovell. Thank you!

This book has had a long gestation, the first chapter was written back in 2008 as an entry for the Elizabeth Goudge trophy at the RNA Conference. In time it became a novella called 'Bah Humbug!" and then a short novel called 'Wedding Spirits' which HarperImpulse bought last summer. Since then it has had a bit of an overhaul. It's doubled in size and has a new name!

The cover is amazing and the only thing that could make it better would be pink glitter (something that comes up a lot in the book). I can't wait until June when it will be out in the wild."

And if all that wasn't enough of a tease, I'm also able to share the blurb with you all- eek!

What the Dickens is going on?

Edie Dickens is a shark of a divorce lawyer.  She doesn't believe in love and she scoffs at happily ever afters, however she's agreed to be maid of honour for her oldest friend, Mel in two weeks and she still has the hen do to endure.  But she has even more to endure when she's visited by Jessica Marley's ghost and finds out she must change her ways or end up being damned to an eternity watching other people's happiness.  Edie is visited by the Ghosts of Weddings Past, Present and Future every Friday night until the day of the wedding.  Can she learn from her mistakes in time?  And did the ghosts send hunky new lawyer, Jack Twist, to distract her?

Appetite well and truly whetted? You can interact with Brigid (do it! She's hilarious!) on twitter @beecee and via her facebook page.  You can also find out more about her work on the Harper Impulse website.
http://www.harperimpulseromance.com/authors/brigid-coady