I'm delighted to be able to welcome Sally Malcolm to Books with Bunny today, to discuss a topic close to her heart- why does she write historical romance?  Sally has written a piece exclusively for the blog, to say exactly why...


The other day over coffee a friend of mine, a reader of contemporary women’s fiction, asked me this question:  ‘Why historical romance? I mean, have you considered writing something more serious?’


I was a little taken aback and replied with something like, ‘Oh, well, I suppose I just really enjoy the escapism.  It’s fun.’


And that’s true, of course.  But it’s definitely not the only reason, or even the best reason, for reading or writing historical romance.  I’ve been considering the question for a few days now and this is what I wish I’d told my friend.


First, you can’t lump all historical romance into one huge genre any more than you can with ‘contemporary romance’ or ‘women’s fiction’.  Some historical romance is fun and escapist, and there’s nothing wrong with that.  Julia Quinn’s Bridgerton series is a wonderful way to escape from the everyday grind; it’s so much fun to curl up with one of her books and a nice cuppa and chuckle away at the antics of her heroes and heroines.  But other books tackle deeper subjects – Laura Kinsale’s Flowers from the Storm is a classic, with its damaged, ‘maddened’ hero and Quaker heroine, estranged from her community and her own sense of self.  While this year’s wonderful A Memory of Violets by Hazel Gaynor tackles the harsh, brutal lives of Victorian London’s flower girls.  And then there’s my favourite historical romance sub-genre: action and adventure.  For danger and pure sex appeal, you can’t beat one of Joanne Bourne’s intrepid pairs of heroes and heroines   – such as Robert Grey and Annique Villiers from The Spymaster’s Lady (which I’m reading right now). Not only is the romance full-on, but so is the action, the tension, and the intrigue.  It makes for a breathless read.


Second, historical romance gives you such a large canvas to work on.  I mean, we’re talking the whole of human history folks!  There’s simply so much of it to play with.  From the ancient world, captured by books such as The Hand of Isis by Jo Graham, about Charmian, half-sister and handmaiden to Cleopatra, through to the Sadi Jones’ wonderful novel, The Outcast, set in post-war England, there has to be something for everyone.


But finally I realised that I didn’t have to justify why I love historical romance because it’s no better or worse than any other literary genre.  They’re all stories about people, about their bitter conflicts and terrible betrayals, their complex loves and hard-won triumphs.   And in the end it’s not the setting of the story that makes for a good book but the quality of the writing – whether it’s a fun Regency romp, a heart-breaking romance, or a full-blown adventure.


So the next time I’m asked the question ‘Why historical romance?’ I’m simply going to answer ‘Why not?’


The Legend of the Gypsy Hawk – Sally Malcolm


‘Come then, and I’ll tell you the tale of the Gypsy Hawk and her wily captain – the infamous Zachary Hazard …’ 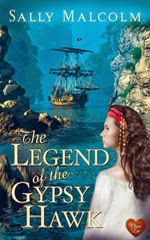 To Amelia Dauphin, freedom is her most prized possession and she will stop at nothing to keep it. Daughter of a Pirate King and the youngest captain in her father’s fleet, she lives on the island of Ile Saint Anne, where pirates roam free and liberty reigns.


Zachary Hazard, captain of the Gypsy Hawk, hasn’t been seen on Ile Saint Anne for six years but his reputation precedes him. To Zach, liberty is the open water and he has little time for the land-bound pirate island.


But when he hears that Amelia’s people could be in danger, he has no choice but to return. And what begins then is a desperate fight for freedom and a legend in the making …


A swashbuckling pirate adventure. Pirates of the Caribbean for adults with a sizzling romance at the heart!


Set among the freebooting pirates of the early eighteenth century, The Legend of the Gypsy Hawk is a tale of romance and adventure, but ultimately it’s a story of love and its power to redeem even the most broken of souls.  It moves from the exotic shores of Ile Sainte Anne to the frozen streets of a London winter and at its heart lies one question: how much would you sacrifice for duty?  Your life, your freedom – or the one you love?

Sally lives in London, England with her American husband and two children. She is co-founder and commissioning editor of Fandemonium Books, the licensed publisher of novels based on the American TV series Stargate SG1, Atlantis and Universe. Sally is the author of five of the Stargate novels. She has also written four audio Stargate dramas. And recently she completed work on three episodes of the video game Stargate SG-1: Unleashed which were voiced by Stargate SG-1 stars Richard Dean Anderson, Michael Shanks, Amanda Tapping and Chris Judge.


The Legend of the Gypsy Hawk is the first in the Pirates of Ile Sainte Anne series.