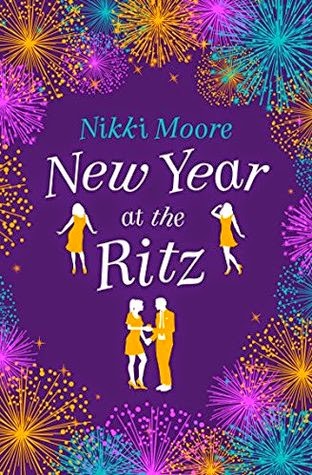 Everyone keeps telling Frankie Taylor that a new year is a time for new beginnings. She's not so sure. Single for six months, she's been more than happy on her own, thanks very much!

At least, that's what she thinks until she receives a note on New Year’s Eve inviting her to follow the clues, and her heart, across Knightsbridge.

But who's behind the romantic adventure? Old flame Christian who she loved for years and was always there for her, or new admirer and work colleague Zack, who has the habit of turning up in all sorts of unexpected places?

There's only one way she's going to find out…

I've got to start by saying this series was made for me.  I absolutely adore London, romance and quick reads, so I must be right up there as Nikki Moore's target market.  I read the first book in the series (although the link is the London setting- the stories themselves are stand alone) Skating at Somerset House last month and couldn't wait to read New Year at the Ritz.  I'd pressed 'buy now' on the Kindle as soon as I'd finished book one.

This time we meet Frankie.  She's had a tough time since her Mum died what with the break down of her long term relationship and the impact of an accident on her life.  Add to that that she lives above a stinking kebab shop and it's fair to say she feels pretty down on her luck.

All that changes when she's sent a New Year's Eve note from a secret admirer.  Frankie is baffled by the attention, but most of all she's intrigued.  Could it be her wealthy ex Christian trying to win her back?  Or the lovely, kindhearted Zack who's been there for her in her darkest time?

I loved the idea of a romantic trail of clues leading to a glamorous start to the new year, and it made for a quirky romantic novella. Frankie is the epitome of a woman who is stronger than she thinks and I found her easy to relate to throughout (although it's fair to say no man has ever treated me to the level of pampering she gets in the run up to meeting her date!).

The fireworks over London as Big Ben strikes midnight is a big part of NYE for many people, and these final scenes where the romance frantically unfurled were satisfying in the extreme.  Although I'm left wanting so much more- please let there be an update on all the characters at some point!  I need to know if they got their 'happily ever after's'!

Whilst I enjoyed the first in the series more, New Year at the Ritz has the potential to sweep you off your feet and whisk you away to an opulent, indulgent place.

Go on, spoil yourself.  Because Nikki Moore is going to be big, and when she is, you can say 'I read her when...'

New Year at the Ritz is out now, published by Harper Impulse, an imprint of Harper Collins publishers.