Before I write another word, I’d like to give a huge thanks to Books with Bunny for the opportunity to help celebrate the wonderful books Harper Impulse has published. I’ve read many of them myself and haven’t yet read one I didn’t like. Need any recommendations? Ask me and I’ll be happy to direct you toward some great reads. To name only a handful, I’ve read books by Nic Tatano, Romy Sommer, Rae Rivers, Lori Connelly, Aubrie Dionne, Vonnie Davis, and Lynn Marie Hulsman and would highly recommend them all.

And since I have the opportunity, let me introduce you to my series published by Harper Impulse, who insists my books are “perfect for fans of the Sookie Stackhouse and Stephanie Plum books.”
What do you get when you combine sexy private investigators with psychic abilities, pets, ghosts, serial killers and romance? Some really fun reads, that’s what. It doesn’t officially have a series name, but I refer to my series as the psychic detectives series. 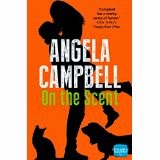 The first book is ‘On the Scent,’ which is about a tough P.I. who falls in love with a pretty nurse after she hires him to protect her millionaire cat and dog. The sexy hero is psychic and can communicate with the pets, Abbott and Costello, and much hilarity ensues as a result. Plus, I modelled Zachary Collins after Henry Cavill in the looks department, so there. Here’s what people have said about “On the Scent”:

"That blurb alone (as well as being a romance) was enough for me to download this book. I loved the characters, Hannah and Zach, but especially Abbot and Costello. I had several laugh out loud moments and just enjoyed the book." ✯✯✯✯✯

"Angela Campbell is definitely a reader’s best friend. This is one fantastic adventure." - Night Owl Reviews - A Top Pick! 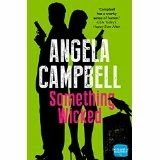 The second book is ‘Something Wicked,’ about a psychic medium who helps the police solve a serial killing in one of the most haunted cities in America. The hero is a skeptical cop, and the brother of the sexy P.I. from book one, and sparks fly between him and Alexandra King, the sassy and smart heroine. Here’s what people have said about “Something Wicked,” a 2014 Readers' Crown finalist:


"The author kept it interesting with the banter and flirtation between the main characters and the supporting cast (specifically the Charleston ghosts) was also very entertaining. It wasn’t too dark, was steamy but not raunchy and had a good amount of action." ✯✯✯✯

“I was expecting what most writers churn out in the paranormal or cozy crap these days. Instead I was pleasantly surprised. … It's one of the better books I've read of this genre and for someone who really does like the genre, I'm saying a lot there.” ✯✯✯✯✯ 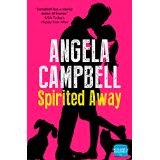 The third book, “Spirited Away,” features the agency’s adorkable non-psychic cyber security specialist attempting to solve a paranormal mystery on her own while petsitting the animals from the first book and trying to impress the hot guy next door. Chaos and hilarity ensue. It’s awesome. Here’s what people have said about “Spirited Away,” a Crowned Heart for Excellence recipient from InD’Tale magazine:


“I would recommend this book to anyone who likes a good mystery, a good comedy, and just enough para-normality added in to keep you turning the pages deep into the wee hours of the night to see what is going to happen next.” ✯✯✯✯✯

“Every now and then I’ll come across a book which reminds me exactly why I love reviewing so much – and Spirited Away was one of them.” ✯✯✯✯✯


Each book in the series can be read as a stand alone, or they can be read together. There are no major cliffhangers and lots of happily-ever-afters. Pets are a recurring theme because, well, I love animals and can’t imagine a good story without at least one in it. Can you?
***
Angela Campbell is the author of the psychic detectives series from Harper Impulse. Learn more about her and her books at www.AngelaCampbellOnline.com.