Letters to the Lost- Iona Grey 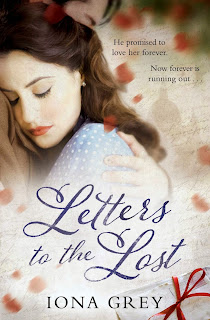 The Blurb
1943, in the ruins of Blitzed London…

Stella Thorne and Dan Rosinski meet by chance and fall in love by accident. Theirs is a reluctant, unstoppable affair in which all the odds are stacked against them: she is newly married, and he is an American bomber pilot whose chance of survival is just one in five.

… He promised to love her forever

Seventy years later Dan makes one final attempt to find the girl he has never forgotten, and sends a letter to the house where they shared a brief yet perfect happiness. But Stella has gone, and the letter is opened by Jess, a young girl hiding from problems of her own. And as Jess reads Dan's words, she is captivated by the story of a love affair that burned so bright and dimmed too soon. Can she help Dan find Stella before it is too late?

Now forever is finally running out.

The Review
This is one of those reviews which is going to be a challenge to write because I loved it so much!  I'm not sure I can do justice to Iona Grey's fabulous debut, however much I try, but I'll do my best...

Every once in a while a book comes along which blows your mind and breaks your heart.  Letters to the Lost is one of those books.  Regular readers of my blogs and reviews know I love a good romance and especially one that will have me weeping uncontrollably.  This book is a dual timeframe and both stories had me broken and turned me into a jibbering wreck!

The first story is that of Stella and Dan, thrown together in wartime London.  Their secret affair brings them temporary happiness in the most desperate of times, but circumstances mean they cannot stay together.  If this had been set in a more modern era their relationship could have seemed seedy or immoral, but I found it just devastating!  Dan was the perfect hero, a brave and humble man in uniform, fighting for justice.

There were some disturbing scenes in Dan and Stella's story, as well as emotional turmoil and a whole lot of angst, but somehow it remained mostly uplifting, buoyed along by their love and hope.  That says a huge amount about the skill of Iona Grey as a writer.

Jess is the modern-day protagonist, a young lady who has fallen on hard times as she escapes an abusive relationship.  My heart was in my mouth for her, willing her to find a safe, stable home and someone to give her the TLC she deserves.  She breaks into an empty house, never expecting it to bring anything more than a temporary roof over her vulnerable head.  When she opens a letter addressed to Stella that arrives at the house, Jess makes it her mission to find her.  Unravelling the mystery of what happened to Stella becomes Jess's purpose, and through that her own life changes beyond all recognition.

Without giving away the plot, this is a rollercoaster ride of a novel which has you full of the joy of love one moment and crushed by the life's realities the next.  I had to put this book to one side at one point, not because of any direct parallels between the plot and my own life, but because it made me reassess how one event can impact on your whole being and change your path.  I challenge anyone who reads this book not to become slightly introspective, because it really does examine the 'what- if's and the 'if-only's.

I loved the delicate twists, unforced and totally believable, and Iona Grey's exquisite writing style.  She's a definite talent and I'm already awaiting her next release with bated breath (and a box of tissues, if it is anything like Letters to the Lost).

One of the best debut novels you're ever likely to read.

Letters to the Lost is out now, published by Simon and Schuster.

With thanks to the publisher for providing me with a galley copy of this book in return for an honest review.