Somewhere Only We Know- Erin Lawless 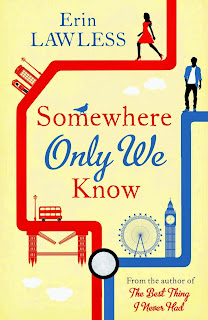 
‘Engaging modern day romantic fiction, that will make you smile all the way through.’ – Bestselling Irish author Carmel Harrington

Alex Bradley can't help but feel that life is rather passing him by. And not just life – promotions, invitations, romance; the girl he loves only has eyes for his flatmate and his 9-5 job as the Immigration department skivvy is slowly numbing his soul. Until he meets Nadia.

Nadia Osipova is running out of time. With no money, no lawyer and a totally fictitious boyfriend, she’s got one last summer and one last appeal before the British government deport her back to Russia.

It's going to be a bumpy ride, one she's dragging her new friend Alex along for. As Nadia races through a list of all her favourite London adventures, for what may be the last time, Alex can’t help but start to see the city, and his life, through Nadia’s eyes.

From hazy summer days on the Common and heady nights in Soho’s basement bars, to twilight walks along the Southbank, will Alex realise what he’s got before it’s too late?

Funny, addictive and always honest, this is a love letter to London, friendship and the unexpected from the author of the bestselling The Best Thing I Never Had.

The Review
Show More
At the back end of 2013, I was invited to take part in a blog tour for a book by a debut author.  I wasn't told much about it; only that it was contemporary romance and centred around a group of friends at university.  Despite being up to my eyes in Advent-ures in Fiction, my annual celebration of festive books that runs throughout December, I said yes.  And I'm so glad I did, because that book, The Best Thing I Never Had, was one of my favourite reads not just of that year, but ever.
I've been impatiently waiting for a new book from Erin Lawless for the past eighteen months.  I've hounded the poor girl with tweets asking questions, like 'what's the new book called?', 'when's it out?', 'can't you just give me some teensy hints about what the characters are like?'
And now, finally, I'm able to say I've read it, and I love it just as much as The Best Thing I Never Had. It is powerful and emotive, it made me laugh, and cry, and feel.
Somewhere Only We Know is told from the viewpoints of two central characters- Alex, who works in the immigration department, and Nadia, who is waiting for the government to make a decision about whether or not she can stay in the UK.  The pair start out as strangers, but from the moment Alex lays eyes on Nadia's application he takes a shine to this vivacious girl, someone who has friends fighting for her to be granted permission to stay, someone who loves British life, who has grabbed London by the scruff of the neck and desperately tried to experience all that the city has to offer.
I'll admit it.  At the start of the book Alex was a bit irritating. He comes across as a bit of a wimp.  He's a games console geek who spends most nights playing gooseberry and feeling a bit jealous, because his best friend's going out with the girl he himself fancies.
But, when Alex and Nadia's paths coincidentally cross, he's forced out of his shell.  Alex tries new things, grows in confidence and becomes someone more fun-loving.  More laid back.  More like Nadia.
Their friendship grows and soon they are spending more and more time together.  What they have together is enviable and the easy openness Nadia and Alex share floods off the page.  Honestly, this book gave me so many warm and fuzzies, it's untrue!
Of course, what happens in the future depends on whether Nadia will be given Indefinite Leave to Remain and be able to stay in London.  If she has to return to Russia, she'll be leaving not just Alex, but her friends Holly, Caro and Ledge, who are still backing her application with a desperate, but empty, hope.
I cried during the opening chapters and I wept at the end.  This book was devastatingly brilliant, and the warmth of Alex and Nadia's relationship radiated off every page.  It's the kind of book that makes you want to tell those you love just how special they are to you and to wrap them in a bear hug and never, ever let go.
Erin Lawless- you've done it again.  Somewhere Only We Know is an absolute triumph.  From now on, whenever I'm asked for my favourite authors your name is going to be right up there.
So, I'd better head off to twitter because I've got just one more question...how long until book three's released?!
Somewhere Only We Know is released in ebook format on June 11th 2015 and in paperback 16th July 2015, published by Harper Collins' digital first romance imprint Harper Impulse.
With thanks to the author and publisher for providing me with a copy of this book in return for an honest review.
Posted by Katey Lovell at 15:59