Caroline Storer, author of The Roman, talking about her hero... HARPER IMPULSE FORTNIGHT

Caroline Storer is today's guest on Books with Bunny as part of Harper Impulse fortnight!  She's talking about her hero and her book The Roman...

Firstly, thank you Kate for having me on your Blog.  I thought I would give a little background into how I came to choose the hero for my debut book – “The Roman”.

I’ve always been fascinated by Roman history, which has been with me since childhood when we learnt all about the rise and fall of the Roman Empire at primary school.  Watching films such as Quo Vardis, Spartacus, The Ten Commandments and Ben Hur as a teenager cemented that love of all things “Roman”.  In recent years the mini-series Rome and Spartacus re-ignited that love.

But if I have to pick one film that made an impact, then it would have to be The Gladiator; or more specifically General Maximus Decimus Meridius – a.k.a Russell Crowe in The Gladiator.  I’ve watched this film about 10 tens now and I’m still bowled over by his gorgeousness!  He is the typical alpha male Roman hero IMHO.  And it was Russell Crowe’s magnificent performance in that film that inspired my hero Marsallas in my debut book “The Roman”.  When I was writing Marsallas’s story I had a picture of Russell Crowe taped to the side of my PC.  A quick glance every now and again was all I needed to get back into Marsallas’s skin and write his story.  A tortured hero – lovely! 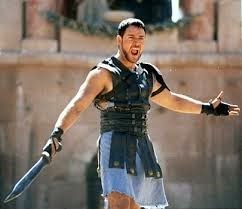 A bit about me:  I live on the beautiful (if slightly windy) island of Anglesey in North Wales.  I’m happily married to my own Alpha Hero, Colin, and have one step-son and grandson.  By day I’m an Environmental Health Officer for the local Council.  My work can be quite challenging to say the least, and no one day is the same.  I find escaping into a good book (either reading or writing one) a great way of relaxing once I’ve finished work.

The Roman – Famous charioteer, Aulus Epidius Marsallas wants revenge against Justina Philipus - the only woman he’s ever loved, but who’d betrayed him by becoming his uncle’s mistress.  Forced to meet Marsallas for the first time in six years, Justina is shocked at the changes she sees in him.  Gone is the carefree youth she once loved, now replaced by a hard muscular stranger.  But there is no denying the attraction that still flows between them, and when his uncle dies, Marsallas offers sculptress Justina a challenge – a bronze stature of himself, and his four horse chariot, to be displayed at the Circus Maximus.  Justina knows that this commission is just what she needs to make a name for herself, and give her the freedom she covets, so she accepts Marsallas’s challenge.  However, Justina is unprepared when Marsallas states one further condition – she must become his mistress.  But Justina has a secret, she’s still a virgin, she just hasn’t told Marsallas yet...


On Barnes and Noble - http://ow.ly/tPHvY

You can also find me on my blog at - http://carolinestorer.blogspot.co.uk/


Thanks again, Kate for having me.  It’s been a blast!  Caroline x