Cover reveal for This Is One Moment by Mila Gray

Mila Gray has an army of fans, and they'll all be excited today as it's time for the cover for her next release This is One Moment to be revealed on blogs all over the world! 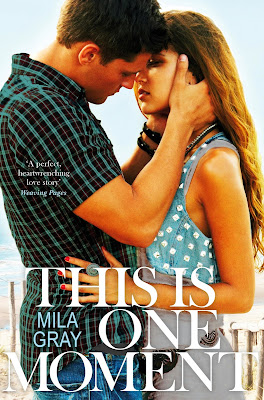 A wounded Marine who thinks he's beyond saving.

A girl who's determined to prove him wrong.

Didi Monroe's waited her whole life for the type of romance you see in the movies, so when Hollywood heartthrob Zac Ridgemont sweeps her off her feet, Didi believes she might finally have met the one.

While Zac's away filming for the summer, Didi begins her internship at a military hospital in California. There, she meets wounded Marine Noel Walker. Frustrated on the outside and broken on the inside, Walker's a pain-in-the-ass patient who refuses all help.

Yet Didi can't help but be drawn to him, and though he's strictly out of bounds it soon becomes impossible to ignore the sparks flying between them.

As the attraction simmers into dangerous territory, Didi finds herself falling hard for a man she knows is going to break her heart. Because Walker doesn't believe in love or happy ever afters. So what possible future can there be?

Then tragedy hits, shattering both their worlds, and Didi is forced to choose between fighting for love or merely falling for the illusion of it.

This is One Moment is released on 11th September 2015, published by Pan.