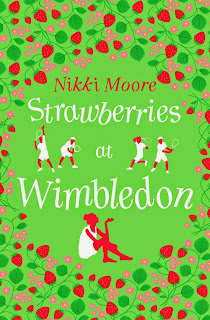 The one that got away?

Sipping Pimms and eating fresh strawberries at Wimbledon are the perfect start to the British summer for Rayne. Immersed in her career as a journalist in the City, she's been too busy and distracted to give men – or other outside interests – much of a chance lately. That's something her friend Lily thinks she should correct, coming up with the perfect ‘sex with an ex’ solution – much to the amusement of the crowd on Centre Court!

When Rayne runs into old flame Adam, former good guy who is now all grown up with a hint of bad boy about him, it's a tempting thought. But is that such a good idea, when she knows that four years ago, she broke his heart?

Back from travelling the world and settling into running the family business, Adam never expected to see his university girlfriend again. And he definitely didn't think he would still be angry with her for running away, or that she would still have the same stunning effect on him. But she does, so maybe the perfect way to get her out of his dreams and from under his skin, is to have a hot sex-filled night with her? The only trouble is, one night might not be enough…

First love – can you ever go back?

I think I'm one of Nikki Moore's biggest fans, and as the last short in her #LoveLondon series was released on Thursday I knew I'd be glued to my kindle to fall in love with another supercute couple.

This time it was Rayne and Adam, old flames from their uni days who find themselves coincidentally sat together at Wimbledon.  I'm a fan of the 'the one that got away' trope, so expected to be reeled in by their story, and I wasn't wrong.  Strawberries at Wimbledon is told in the present day with flashbacks to scenes from university.  At times I had to concentrate to remind myself which time frame I was in, but mostly this was obvious by what was happening around them and the way the characters were behaving.

Rayne was fabulous, I could completely relate to her.  She's fragile and complex in one way, yet still a strong young woman with a fighting spirit.  Her friendship with Lily is an easy one and I loved that- it made me think of some of my own girlfriends who I know would be there for me through thick and thin, being honest and supportive.  I could happily have read a full length book about these two and their escapades (prequel, maybe?!)

Adam, on the other hand, didn't immediately strike me as my usual kind of hero.  He was a little bit more rough around the edges than my usual type (both in books and real life!) but as the story developed I had a greater understanding about events in his own life which made him like he was. As a character though he wasn't ever going to be challenging for one of my book boyfriends, he came across as too standoffish and spoilt for my liking in the sections set during university.  However, the modern day Adam was much more my kind of man, so maybe I could be swayed...

He might not be the sort of guy I'd go for, but that certainly doesn't mean I wasn't rooting for him and Rayne-after all, I love a love story!  This one was a bit more angsty than the rest of the series though, I felt like I'd been through the mill by the end and I'd swallowed down the lump in my throat on more than one occasion.  I'd been angry and emotional and I'd laughed at the more light hearted moments.  There was a bit of everything crammed into this novella.

I cannot emphasise enough how good a writer Nikki Moore is.  She creates characters with hidden depths and slowly reveals them to the reader in a delicate way, peeling back the layers until their true self is laid bare.  Honestly, the writing style is impeccable.

I'm now counting down the sleeps until the release of the final book in the series (40 at the time of writing!), when the full length novel Picnics in Hyde Park is released next month.  Although how I'll fill the void left by this series is something I've not yet figured out an answer to.

Strawberries at Wimbledon is out now, published by Harper Impulse.