No One Wants to Be Miss Havisham- Brigid Coady

You may remember that Books with Bunny was the first place in the world that you could see the gorgeous cover for Brigid Coady's first full length release No One Wants to Be Miss Havisham.
Well today I'm delighted to go one better by sharing the first review of this gem of a book! 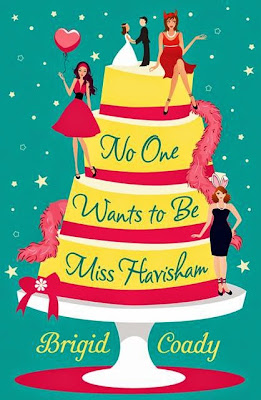 The Blurb
﻿
What the Dickens is going on?

Edie Dickens is a shark of a divorce lawyer. She doesn’t believe in love and she scoffs at happily ever afters, however she’s agreed to be maid of honour for her oldest friend, Mel in two weeks and she still has the hen night to endure. But she has even more to endure when she’s visited by Jessica Marley’s ghost and finds out she must change her ways or end up being damned to an eternity watching other people’s happiness. Edie is visited by the Ghosts of Weddings Past, Present and Future, every Friday night until the day of the wedding. Can she learn from her mistakes in time? And did the ghosts send the hunky new lawyer, Jack Twist, to distract her?

When I first read the blurb for No One Wants to Be Miss Havisham I wasn't sure what to think.  I'd loved Brigid's 'Kiss' short stories and this sounded like something way out of leftfield in comparison.  Romance stories with ghosts are a bit hit and miss for me, and anything paranormal is out of my comfort zone.  This, however, is a work of genius.  The ghostly elements are humorous (leaving trails of pink glitter in their wake) as well as giving the reader an opportunity to find out about Edie's background by visiting weddings of the past, present and future.

I really liked Edie's dry and cynical outlook, especially when compared to the romantic viewpoint of everyone else in the book and it was highly believable that she'd feel that way when her own experience of relationships is less than perfect.  She's somehow both bright and ditzy, and although she has a reputation for being hard nosed, her personality changes as the book progresses.  She's unlike most romantic heroines, that's for sure.

Now onto Jack.  Jack Twist was a great character.  Rugby player and local hero, he works with Edie at a law firm.  He's strong in every sense and a no-nonsense kind of guy.  However, he's warm-hearted and always seems to be the one helping Edie out of all the messes she gets herself into.  There's one scene where Edie longs for her feet to be on solid ground and Jack's there beside her, offering support.  My heart was all aflutter right then and I could have done with the smelling salts. I was full on swooning, I'm telling you now.

If laughs are your thing, then Coady's observations will have you chuckling- there are some hilarious portrayals of characters (Edie's boss in particular!), cringeworthy weddings and alcohol induced embarrassments. I think I'm going to be looking closely at suit linings for the foreseeable future as a result of this book...

Overall, it's a well written and touching debut which strikes the balance between humour and heart.  If you're looking for an original romance with a quirky twist, look no further- Brigid Coady has stepped up to the helm.

No One Wants to Be Miss Havisham may appeal to fans of Marian Keyes, Sophie Kinsella and Carmen Reid.

Enormous thanks to Brigid Coady for allowing me to be one of the first people to read No One Wants to Be Miss Havisham.